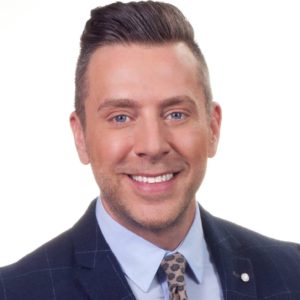 With seven Emmy awards for his television reporting and hosting, Chris Parente  bursts through the screen with unbounded energy, wit and charm. He’s got a youthful exuberance, and yet with 22 years in the business, he’s a seasoned pro. He’s anchored and hosted on affiliate stations with CBS, NBC, CW, and FOX. And whether it’s behind the anchor desk, on the red carpet, or sitting down one-on-one, Chris has a charisma and a chemistry that’s simply contagious.

Chris was thrilled to host an hour of national television, filling in for Regis Philbin on “Live With Regis & Kelly.” They loved him so much, Chris was invited back to the show a second time, as feature reporter for their “Ambush Makeovers.” He has interviewed hundreds of celebrities, actors and politicians, and his live work has been featured nationally on CNN, FOX and MSNBC.

In addition to his degrees in Journalism and Political Science, Chris was a born performer. He studied theatre at Indiana University, and got his Improvisation training at Chicago’s famed “Second City.” He’s performed with Improv Troupes at countless festivals and shows.

“A fast, and facile fun factory,” says the Denver Post. The Westword Weekly raves, “Eye-opening.” Rocky Mountain News declares, “Spot On.” And Kelly Ripa sums it all up by calling Chris “Simply Divine.”