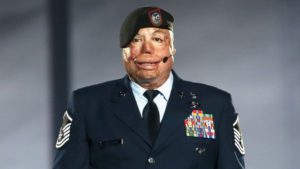 After suffering catastrophic injuries as the result of a landmine in Afghanistan, Israel “DT” Del Toro was given a 15 percent chance of survival. Then his doctors told him he was going to be in the hospital for another year, that he may never walk again, and he’d probably be stuck on a respirator for the rest of his life. But DT had a promise to keep to his son: that he would never have to grow up without a father.

Senior Master Sergeant Israel “DT” Del Toro’s fight to survive began on the side of a mountain near Qalat, Afghanistan, after his Humvee detonated a concealed landmine. He suffered third-degree burns over 80 percent of his body, as well as losing fingers on both hands from the blast. His comrades kept him conscious until DT could be airlifted out by reminding him of the promise he’d made that he would not leave his three year-old son without a father.
That promise, along with the love and support of his family – his wife, his son, and his Air Force comrades – made possible a story of overcoming the greatest of odds. A recipient of the Pat Tillman Award at the 2017 ESPYs, DT now shares his story of triumph with audiences across the country, inspiring those that hear it to push themselves further if they know what they’re fighting for.
To learn more about Israel speaking at your next event, please contact us at (303) 478-6652 or email us today!