Kendra Scott Jewelry will host a Kendra Gives Back Party for one of Denver’s most beloved children’s charities, Project Linus, Wednesday, July 6, 5:30-7:30 pm at their newly opened, and first Colorado store, located in Cherry Creek. The event is to celebrate Project Linus’s 20th anniversary. It will include sips, sweets and jewels and is open to the public.

Project Linus was founded in Parker after Karen Loucks Rinedollar spotted a heart-wrenching picture. It was of pediatric patient Laura Williams in the Christmas Eve 1995 issue of Parade Magazine. It was a way for her to give back to the community by combining a love of blanket making (knit, crocheted, quilted and tied) and helping children. She and former husband, drummer Ginger Baker, ran a polo club that benefited local charities including the Rocky Mountain Children’s Cancer Center. Fundraising and blanket making activities helped support the Center’s healing efforts.

What started as a grassroots effort quickly blossomed into an international effort.  Rinedollar, a public relations specialist, contacted media from “Oprah on down” to share the story. Within months, Project Linus was featured on a national talk show and thousands of volunteers appeared “like Miller moths on a hot summer night.” Many sent blankets to Colorado and others brought Project Linus efforts to kids in their own communities.

Chapters formed and the mission expanded to assist any seriously ill or traumatized child. The story was featured on Oprah, in People Magazine, on NBC Nightly News with Brian Williams, the Today Show, and more. The book Working for Peanuts: The Project Linus Story was released in 2011 and a documentary is in the works. Peanuts creator Charles Schulz was a fan of the effort, even lending his lovable Linus image to the cause.

Today Project Linus is 370 chapters strong across the United States with efforts also in Canada, England and Australia. Almost six million blankets have been distributed to children around the globe through hospitals, hospice, police and fire departments, social services, relief organizations. They are also distributed to military children whose parents have been deployed, injured or killed in service. The Denver chapter has locally comforted Columbine and Arapahoe High School Students, Aurora Theater Shooting Survivors and their families, flood and fire victims as well as assisted with 9/11, Katrina (25,000 blankets to Louisiana and Mississippi), Haiti , tornadoes, bombings and other national and international emergencies.

Although the Project Linus national headquarters moved to Bloomington, Illinois in 2001, Rinedollar is still active as the Denver chapter coordinator as well as speaks professionally nationwide on the topics of Volunteer Appreciation, Making a Difference and The L.I.N.U.S. Effect (Live with Purpose, Invest in Others, Never Say Never, Undertake Something Bold and Start Now). She is Vice Chair of the Board of Hide in Plain Sight (H.I.P.S.)- a Douglas County effort awarding college scholarships to homeless high school students. She has received numerous awards for her humanitarian work including Oprah’s Angel, Ten Outstanding Young Americans and JC Penney’s Golden Rule Award. 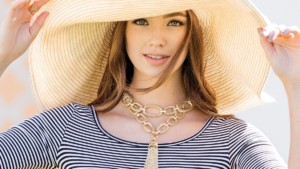 ast 12 months, Kendra Scott has donated $1M and 50,000 pieces of jewelry while working with over 1,000 local and national organizations. Kendra Scott Cherry Creek North is at 175 Fillmore Street, Denver 80203. There is no cost to attend the celebration. 20% of the sale proceeds will benefit Project Linus Denver. Rinedollar and special guests will be at the event.

Karen Loucks Rinedollar is a sought after speaker for motivating nonprofits, associations, corporations and school audiences. To learn more about her availability and fees, please visit.