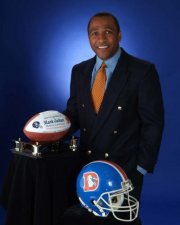 “Speed is the thing that scares you to death,” Broncos coach Dan Reeves said of Mark Jackson and the 3 Amigos.  “Anytime they touch the football, they have the chance to go all the way.”

Mark Jackson was drafted in the 6th round of the 1986 draft after an All-Big Ten Conference college career for Purdue University.  At 5-10, 180lbs, Mark was the guy that Hall of Fame quarterback John Elway looked for whenever a play broke down.  In his rookie season, Jackson caught two crucial passes in “The Drive”.  First was the 3rd and 18 strike that gave the Broncos a 1st down and breathing room, and of course the Touch Down reception in the Dawg Pound that silenced the crowd and sent the 1986 AFC Championship game versus the Cleveland Browns into over-time. The Broncos won that game and went on to the Superbowl.  “The Drive” is the most memorable series in NFL History and the only series that is affectionately referred to as “The Drive”.

Jackson was named Denver’s most valuable player for his performance in the 87’ AFC Championship Game vs. Cleveland, catching four passes for 134 yards including an 80 yard touchdown reception. He was also the leading receiver in Superbowl XXII that year.

Jackson is eighth in Bronco history in both receptions and yards and his 16.3 average per catch is ranked 3rd. He also established the record for the longest reception in postseason play, 80 yards. A tough, smart receiver with an uncanny ability to get open, he played seven seasons with the Broncos. Jackson also played for the NY Giants and the Indianapolis Colts before retiring in 1995.  He has 334 receptions for 5,454 yards, a 16.3 average and 28 touchdowns and played in three Super Bowls for the Denver Broncos.

Now Mark “The Drive” Jackson is a “Lifestyle Trainer”.  “Never before have I more enjoyed going to work”, Jackson said in an article found in the Rocky Mountain News Business section.  Jackson is helping common people to obtain uncommon results through his Lectures and Trainings.  Recognizing the need by many for supplemental income in this down economy, he founded Jack & Associates in 2007 to assist people in making money from home.  He implements proven strategies for wealth preservation and growth. He believes EVERYONE has a Champion inside just waiting to be discovered!!

“Everybody is a genius. But if you judge a fish by its ability to climb a tree, it will live its whole life believing that it is stupid.” – Albert Einstein