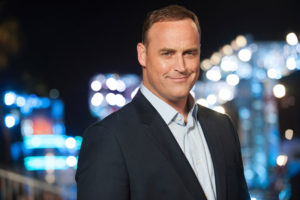 The host of American Ninja Warrior squared off against 15 other celebrities, all representing their favorite charities while vying for the title of “The Celebrity Apprentice.”
In the end, the new Boss-the twice-elected California governor and international movie superstar Arnold Schwarzenegger-selected Iseman to be his Apprentice.

Iseman was diagnosed with rheumatoid arthritis in 2002, so this Emmy-award wining host and licensed MD fights for his charity close to his heart: the Arthritis Foundation.

Life is short, do what makes you happy.” That’s the advice that Matt got from his Dad-a world renowned physician-when Matt quit medicine to pursue stand up comedy. And those words still guide Matt today. He talks ninjas, tells jokes around the world and, in general, proves laughter is the best medicine.

Perhaps best known as the host of the Emmy nominated “American Ninja Warrior” and being named the newest Celebrity Apprentice, the Boston Globe has said of Matt, “The best part about American Ninja Warrior, hands down, is when bro-host Matt Iseman roars the show’s title.” This Spring you can also hear that voice as Matt hosts the spinoff, “Team Ninja Warrior.”

His ongoing battle with Rheumatoid Arthritis transformed him into a strong supporter of the Arthritis Foundation, the charity he’s represented while winning Celebrity Apprentice. Yes, Arnold Schwarzenegger considers him a celebrity.

Dr. Matt checks in every week on Hallmark’s Home & Family, sharing his medical expertise and his unique lifestyle tips. His hosting has already earned him an Emmy Award on Clean House. He also hosted Sports Soup on Versus and Scream Play on E!. He’s starred in countless commercials, numerous sitcoms and Transformers 2.

Matt’s headlined clubs all around the country and done shows for the troops around the globe, including performing in Iraq at one of Saddam Hussein’s palaces.

Matt pitched for the baseball team all 4 years at Princeton University and then got his MD from the Columbia College of Physicians and Surgeons. Yes, he really is a doctor. He now lives in Hollywood and spends way too much time online.

To inquire about Matt’s availability for your next event,