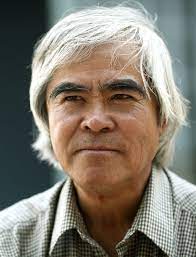 Born in Long An, Vietnam (then part of the French Indochina), Ut began to take photographs for the Associated Press when he was 16, just after his older brother Huynh Thanh My, another AP photographer, was killed in Vietnam. Ut himself was wounded three different times in the war in his knee, arm, and stomach. Ut has since worked for the Associated Press in Tokyo, South Korea, and Hanoi and still maintains contact with Kim Phuc, who now resides in Ajax, Ontario, Canada, a suburb of Toronto, Ontario.

“The Terror of War” by Nick Ut / Associated Press

Before delivering his film with the Kim Phúc photo, he took her to the hospital. The publication of the photo was delayed due to the AP bureau’s debate about transmitting a naked girl’s photo over the wire:

… an editor at the AP rejected the photo of Kim Phuc running down the road without clothing because it showed frontal nudity. Pictures of nudes of all ages and sexes, and especially frontal views were an absolute no-no at the Associated Press in 1972 … Horst argued by telex with the New York head-office that an exception must be made, with the compromise that no close-up of the girl Kim Phuc alone would be transmitted. The New York photo editor, Hal Buell, agreed that the news value of the photograph overrode any reservations about nudity.

In September 2016, a Norway newspaper published an open letter to Mark Zuckerberg after censorship was imposed on this photograph placed on the newspaper’s Facebook page. Half of the ministers in the Norwegian government shared the famous Nick Ut photo on their Facebook pages, among them prime minister Erna Solberg from the Conservative Party (Høyre). Several of the Facebook posts including the Prime Minister’s post were deleted by Facebook, but later that day Facebook decided to allow the photo.