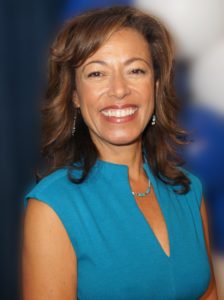 For Emmy Award winning journalist, Tamara Banks, the statement, “One Person Can Make a Difference,” is more than just words. Her life experiences, connect-ability and sense of humor have made her a sought after keynote speaker and emcee.

Her areas of expertise include: social justice and political issues, nationally and internationally, particularly in South Sudan and Darfur, and other parts of the globe where there is little or no news coverage about crimes against humanity and genocide. Her documentary short film, “The Long Journey Home,” was accepted into the 2009 Hollywood Film Festival, “HollyShorts.”

Her work has been featured on numerous news networks including CNN, ABC News, HDNet’s World Report, BBC, Al Jazeera America, WB 2 News, FOX News, as well on as a number of radio stations and newspapers over the past 20 years.

Friendly, engaging, motivational, inspirational, full of spirit, and passionate about informing people about the crisis situation in the Nuba Mountains of Sudan…Tamara Banks was the perfect keynote speaker for our 9th annual Walk for Sudan.  She touched the hearts of 300 students and community members and helped them understand the significance of their support through fundraising and participation in this year’s event.  – Martha Riley, Nuba Water Project Executive Director

As a correspondent she has extensive experience in covering a variety of historical issues and stories like the Columbine massacre and the Aurora Movie Theater shootings to the massive floods in Colorado the summer of 2013. She’s also experienced in covering major hot button topics like the gun rights debate and marriage equality.

Tamara has also traveled to Uganda to interview child soldiers as well as to Rwanda where she reported on that country’s post genocide challenges and successes.

She covered the devastating earthquake in Haiti and embedded with U.S. Army and Iraqi Security forces to report on yet another untold story: U.S. and Coalition Forces training, mentoring and empowering Iraqis before the U.S. pulled out of the war torn country.

Her challenging relationship with her father who was gone most of her childhood helped her develop her independent, tenacious character. Tamara learned that with commitment, hard work and integrity one person can make a difference. She also learned the hard way to not let “perfection be the enemy of the good.”

Tamara is an accomplished equestrian, riding since 4 years old. She plays polo, the sport of kings (and queens.) Her nickname is “Taz” – not as in Tasmanian devil, rather Tasmanian angel!

She looks forward to sharing her insights and talents with you and your organization.

To learn more about Tamara’s availability and fees,